More fast excercises with crayon during a recent workshop

Again these exercises had to be done fast and there was no time to correct or try to make the coloring of paper smoother. These were interesting but very confusing when you tried to take advantage of the creases and design made by marking lines at random.  This exercise consisted of making folds in the paper and drawing a line or curve from the crease line to whatever point we wished.  As the paper was folded the previous line was covered making it imposible to know what kind of design was being created. The paper could not be unfolded until all the paper had been used up. Once it was unfolded we were supposed to color portions we found interesting, and try to create an interesting piece.  Another challenge in these exercises was the fact that  we were supposed to use colors  and combinations that we had seldom used or that for some reason we disliked. 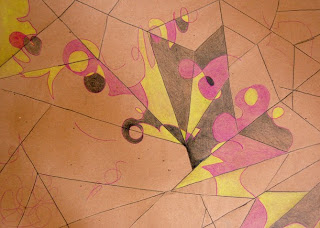 As the time for the second exercise started, I tried to be more careful with my choice of creases and lines but time was up, before I could finish it. 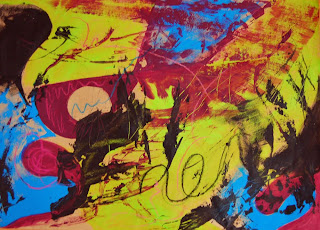 This looks like a childs drawing but the only thing that mattered was to be able to use the creases, lines and color in an expressive way without altering any of those creases or lines.  The truth is I had no idea what I was going to do when I had no control over the exercise.  This was the first that to me was a little bit of a nightmare and I think it was expressed in the result.
Posted by Mary at 3:13 PM

I love the fact that the first one seems restrained, even though you say it is unfinished. Interesting concept, and hope we can chat more about them.

Thank you for the comment Robin, yes I would love to chat with you about these.