Goodbye to a good friend and teacher 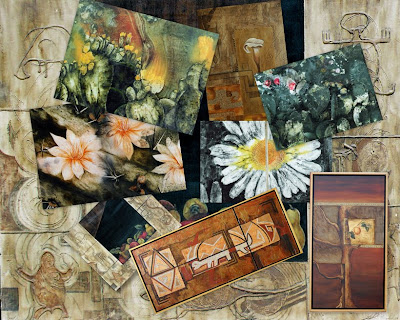 Alberto Martinez 1942-2009. Almost 20 years ago I decided to enroll in a drawing class at the Instituto Potosino de Bellas Artes. I was welcomed by an interesting individual with a mustache like that of Dali and a resemblance to him, quite tall with the elegance and the dignity of a Mexican folklore ballet dancer. This was Alberto, a very talented dancer and a prize winning, superb artist. After two weeks of drawing class he told me, that if I was interested in taking his experimental workshop at the Institute, I could draw well enough for his class. ( I realize Experimental Art and Mixed Media Art, can be executed without great skills in drawing.) He was a teacher that taught me how to lose the fear of ruining what I was working on, and to have the courage to experiment and create with the heart and soul. He also taught me to use a great array of different materials you would usually not use together, and maybe some of his teachings could be called a little unorthodox, but they brought great satisfaction when something would cause a unique effect, that would work artwise. At times I would get frustrated and he would say "turn the painting to the wall and look at it in two weeks, if you don't like it then, you cover it with gesso and start all over again." Every Wednesday morning I would still get together with him, and my friend and classmate Vivi, at her house. We would work a little, or just usually chat over a cup of coffee. One of the last things he said to me was that he would like to see and exhibition of mine, consisting of many more of the charcoal pieces I have done under the mentorship of Michael Newberry. This Wednesday Alberto didn't show up, and unfortuantely, news came today that he had passed away yesterday.
Alberto didn't have a website, like niether do many of the well known local artists here do, they sell their work by having solo exhibitions several time a year, and I don't have any work of his to show either.
I made this photo collage of some very old work I did in his class as a tribute to him today, and unfortuantely they are not of the best of many pieces I did have. Those that I don't have, all belong to someone else, and I don't even have photographs of them. Most of these pictures were taken with a 35mm camera and I scanned them today, so I apologize for the unorganized and quick work, but I didn't want this day to go by without my sharing the loss of this dear friend.
Posted by Mary at 4:23 PM

Mary, I know from our conversations how much this man has meant to you over the years. I am so sorry for your loss and I know you grieve, because he gave you so much. Having a mentor so closely connected to that passion you so love is a treasure. I know he will be sorely missed in your life. May you one day be mentor to another gifted artist and pass on the passion.
Hugs, and I will light a candle for you in his honor.

It is difficult to lose someone who you learned so much from, who became a good friend. My thoughts are with you. And through you, a part of him lives.

I had mentor similar to yours who died 15 years ago. I still think of him and all he taught me and am grateful for knowing him. I know your mentor will have a similar impact on you.

Mary - I am so sorry that you have lost such a integral part of your art circle.

Robin, Jeanette, and Anita, thank you for your words. I think we take people for granted sometimes and when death is so sudden and unexpected you know how much you will miss this person, but also wish you had shown your appreciation a little more. At the same time I am glad I hadn't left his class at a time when he didn't have as many students as before.