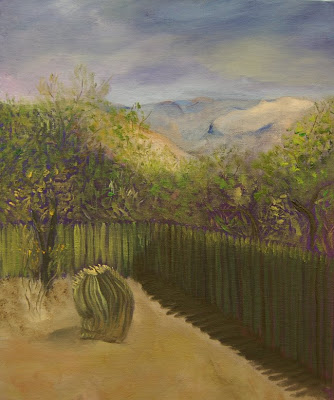 I was hoping to have a session with Michael before posting any of the recent work I have done, but it hasn't been possible, so I'll take the risk of posting something that might need a lot of correcting.

Robin Neudorfer mentioned in her very interesting and descriptive posts in her blog about the Plein Air workshop in Mexico, the fact that many of the village people in rural Mexico, use cacti to fence in, their houses. It is very true and unfortuantely a custom that is being lost. This type of cacti is so hardy and grows so easily from a prune that they won't be easily extinct. They are a Stenocereus cacti and have branches that come straight up from the stem and can be as tall as a medium size tree. If the branches are cut at the stem this serves as a prune that helps the plant, then branches are lined up on the ground to cut them the same size. After two weeks of laying in the sun to hea the cut part, they are then planted in the ground to use as fencing. If they are close enough together they eventually close the gaps between them and not only protect from intruders, but also make a nice wind barrier.

At the ranch we have a stucco wall surrounding most of the area but we only had a barbed wire fence that did not look very nice, surrounding part of the front and one side so we decided to wall in that area with cactus fencing. We have just recently done this, so I decided I would give it a try to paint the inside of the fencing on one side in my most recent Plein Air painting.

This fencing was possible with the generosity of the people living in the village who contributed with the pruning of their fences and with expertise of one of our faithful workers, Mayo and his father.
Posted by Mary at 12:50 PM

Mary - this is LOVELY!! So peaceful and calm. And so Mexican! The distant mountains are super and the sky too! Wonderful piece!

Really good painting Mary. I like it a lot. It looks very natural. I love to see how traditions are carried out in other parts of the world as well.

I love it Mary!
Is this out back along the road?
Beautiful color notes. You have come a long way. Keep going!

Anita, Thank you! I think the peacefulness you feel was that I was quite imersed in it, and fortunately Michael has given me some good pointers to make it better.

Jeanette, thank you for your comment. I agree and I am finding it very interesting to see what different colors emerge from Plein Air painting in different parts of the world.

Robin, I'm so glad you liked it. Yes this is where we were painting that afternoon when we came back from Mineral de Pozos but the fence wasn't there and niether was the big barrel cactus.

My goodness, what an amazing fence! I've never seen a cactus fence before and wouldn't have believed it.

This most certainly is very lovely. It is so much more beautiful than barbwire. I did not realize these lined cactus are called cactus fences.