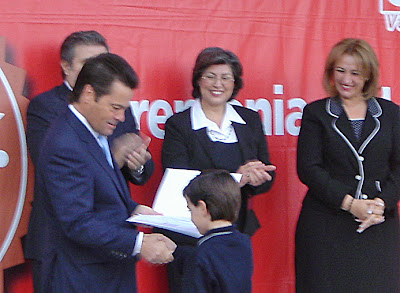 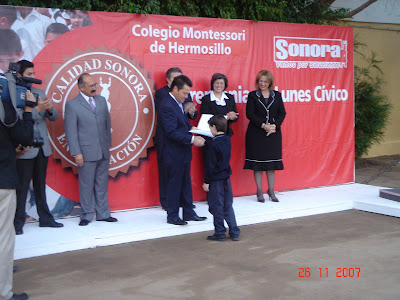 I might be doing this too much now on my blog but I just couldn't pass this one up, it is part of the nature of being a grandmother and a very proud grandmother this time.

This is my 9 year old grandson Luis Paulo receiving a recognition and shaking hands with Governor Eduardo Bours of the state of Sonora. He was chosen to speak and lead the salute of the flag at the ceremony the Governor was going to preside at his school. The reason for the ceremony was that his school was ranked one of the highest in the country scholastically, after a new aptitude test was applied to all the students in Mexico. Two students received the recognition from the Governor, the little girl that got the highest grade and my grandson.
Posted by Mary at 9:31 AM

bragging rights are the mainstay of being grandparents, Mary. LOL how exciting for him! his hard work paid off bigtime.

How lovely. I'll bet the child was nervous, but thrilled too. As well as you. :)

Thank you for your comment Billie, and it was very exciting and well deserved he really works hard at trying to do his best.

Thank you Jeanette! My son sent me the video and I was so surprised to see with what clarity and confindence he spoke. I think it is a gift he inherited from his mother's father, he is a great speaker.

How wonderful. Thanks for sharing this proud moment. Grandmothers are allowed to brag whenever a bragging opportunity presents itself. Dont be concerned that you are doing it too much. You are not!!

Thank you Sue for your visit and yes you are right, these opportunities do not present themselves that often.

Brag as much as you like, Mary. It's a big day for your grandson who is obviously meant for even bigger thing.