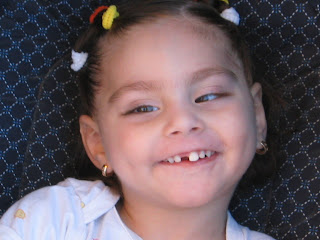 This is Pao, my grandaughter that came into this world in a very tragic way, as her mother's uterus scar, burst open from a previous C Section, leaving Pao without oxygen for five minutes. This left her severly brain damaged and the only thing she could do was smile radiantly and return the enormous amount of love she received from all of us and the peolpe who knew her well from the frequent visits to the Teleton Center (CRIT), for her weekly therapy and evaluation. Pao left us quietly March 13th 2005 at age five, leaving a huge vacuity in our life and heart.

Pao's happiest years were the last two of her life, when my son and daughter in law started to take her to the Teleton Center, (CRIT) in Agauscalientes, a city two hours driving distance from our city. In 1997 Televisa Foundation started annual 24 hour fundraisers on TV and with the help of a great number of companies and people around the world they built the first Center in Mexico City for Handicapped and Brain Damaged children. This has brought hope to thousands of children with special needs. Today two more centers will be inaugurated makingn a total of ten centers in the country. The goal of this foundation is to have a center for every state in the country. The economic capability of the parents of each child that is admitted as a patient of the Center, is evaluated also. Those who can pay the fees do have to, but those that cannot are treated for free. The great majority of these children are from rural remote places and it would take their parents a day or more to get the child to the center and the cost of transportation would be high, so these children are left without assistance. This is why it is so important that each state have a center and at the moment there are 15,000 children waiting to have a center near them. There is still a long road to travel to reach the Foundation's goal but hopefully with events like the 48hour TV fundraiser that will start tonight, another two centers will be built by next year.

Hi Mary,
You know how sad I am over your grieving but I also know that Pao not only left a void in your lives she also left a great legacy behind. She will touch more hearts and souls that most people could ever hope to.
She is truly an Angel working for God doing miraculous works. Love you!

Mary, it's such a deep loss when a child dies. Pao never knew a life any different than the one she had, surrounded by her loving family and especially her Grandma Mary. some souls complete their purpose on Earth after many years, some in only a few. Pao must have been very special. (((hugs)))

Mary, what a dear little thing and what a sadness for you all. Words are totally inadequate but every mother will be able to imagine and empathise with you.

That Teleton sounds a wonderful thing ... we do not have it in New Zealand or in Britain, although there are similar schemes for helping severely handicapped and seriously ill children.

Pao looks in the photo exactly like the loving and happy little girl that you describe ... you must have some lovely memories amongst the sad ones to help you along.

Mary, how tragic for you and all your family. Pao is a beautiful little soul and will continue to warm your heart with her memories. Hugs.

Thank you judi, billie, lesly and jeanette. Yes Pao was a very special child and I know now she came to this world on a mission and she continues showing her presence in our daily lives. I have so much appreciation for the people that work for this cause, they are changing the lives of so many children that do have room for improvement.

Oh Mary, your post really touched me. I have a very big place in my heart for children. I clicked on the link to Teleton, but I don't speak Spanish, so needless to say, I'll show it to my in-laws when they come to visit for Christmas. My MIL is from Mexico and still has a lot of family there. She should be able to translate for me.

Pao, looks like she was such a wonderful child, full of love and wonderment!

Mariana, I remember Pao when she was with you and sadden for her passing. It was very hard to read this without tearing up and know much more difficult for you. Little Pao is an Angel in heaven as she was on earth.

Pao had her Grandmothers goodness. I am blessed by just knowing her through you and knowing you dear friend.
I find myself at a loss for words as I try to comfort you. Please know I care.

Thank you Cynthia and Paula! I felt I had to post this yesterday because she was so much part of the Teleton, in fact her mother and her two little brothers are in Mexico City right now helping those families that have brought their children with them. They have been invited for two years to this event now. My son was not able to go because of work. I have been watching the event on TV and they are almost up to the goal they intended for this year.

This is such a sad post, but at the same time, it's joyous! I have always thought that when children leave us early, that they were too good for this earth and that they were taken by God to become angels. She is truly an angel watching over her family here on earth!